Because we recently relocated to the area, my husband Ben and I spent a lot of the past summer exploring areas in New England, traveling to New Hampshire, Connecticut, and Maine. It gave us a better sense of the region, but we sometimes just visited sites in our state. One day, when we had plans to meet friends at the Fruitlands Museum, Ben had to bow out, which was disappointing for us both. “Don’t worry,” I told him. “There are no shortages of failed utopias in Massachusetts. There will most definitely be other opportunities for you here.”

Like the fabled Fruitlands, some of these nineteenth-century utopias had the significant participation of American Transcendentalists, whose ideals were usually some combination of inspiring and infuriating for their neighbors. Fruitlands was a fairly short-lived experiment; it lasted only a matter of months, when it became clear that this farm in central Massachusetts could not remain self-sufficient through the winter.

Eventually Louisa May Alcott wrote a parody of her father’s farming project that became a book titled Transcendental Wild Oats: A Chapter from An Unwritten Romance. This thinly veiled autobiographical account of their family’s time at Fruitlands ends with her mother telling her father, “Don’t you think ‘Apple Slump’ would be a better name for it, dear!” Clearly the author thought so herself. 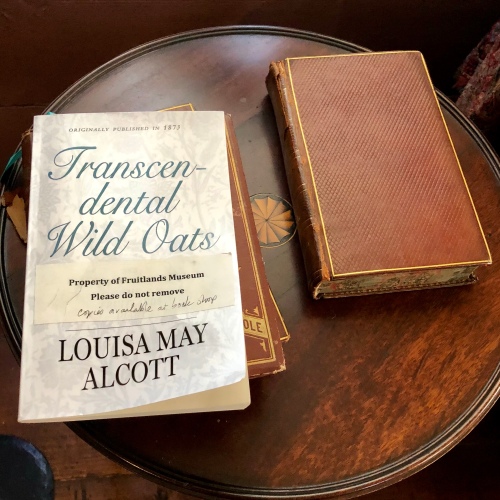 It’s easy to make utopian communities the subject of satire, but I think we ought to resist the temptation to do that too quickly. As my friends and I wandered the museum grounds, we saw how the beautiful site itself could inspire visions. A student I had met from the chaplaincy at Wellesley College was working at Fruitlands over the summer and it was surprisingly pleasant to see her there. She allowed how enjoyable it was to do any job in such a lovely spot.

As we toured the historic house where the Alcotts lived, the museum guide soon deduced that all of us in our group of three were Unitarian clergy. Within minutes, she was telling us a story of her involvement several years ago with a local church that had left her disillusioned with congregational life. These accounts are more commonly occurring than most of us generally care to admit and also quite informative. We suffer failures large and small.

Our faith communities lift up high ideals that we struggle to realize in our lives — that does not make those ideals false, though. The boldness of utopian communities (there were more than 100 of them across the U.S. in the 1800s) was that a group of people committed to living together according to unusual expectations of one another, expectations that were spiritual and social in equal measure. While these communities rarely survived long, they did introduce imaginative possibilities for communal life.

At Fruitlands, pioneering ideas formed around environmentalism, education, and gender equality; in time, these would become increasingly influential around America. Social reformers such as Henry David Thoreau — himself a close friend of Alcott — found inspiration in the experiments that the farm residents had attempted. Instead of being too unsparing of our appraisal of failed utopias, I wonder if we shouldn’t be more appreciative of all they ventured. They sensed so much potential to tap.

These days, most of us inhabiting faith communities find ourselves operating in an innovative mode — we are working with newer models of religious education, finding different ways to use media and technology, and adopting a fresh approach to the social actions we take on behalf of greater justice. Whether or not our experiments succeed, it matters that we are willing to run them. As one wag has observed, we tend to forget that Icarus flew for a little while before he fell.

At the turn of the calendar year, when our minds turn to New Year’s resolutions, we might start to feel some loftiness rising within ourselves; perhaps that merits our indulgence. We human beings tend to be future-forward creatures. In his compelling history Paradise Now: The Story of American Utopianism, Chris Jennings writes that “the tens of thousands of Americans who lived in these communities were not fools…. [these] utopians hoped to construct the perfect society in miniature and then lead by example — to pull, rather than push, the world toward perfection.” Of course they failed. After all, on this side of glory, where does perfection permanently reside?

Yet what I admire about those long-ago residents of Fruitlands and Hopedale and Brook Farm and the rest of the storied sites in this Commonwealth was that they dared to raise their eyes and tried to catch glimpses of glory in their own place and time. So I will resist joining in the snide jokes of cynics and remember that instead. They pulled us ahead. We don’t have count to the days of those utopias existence as failures, whether they spanned months or years. The days were distinctive ones, however many they numbered. Isn’t that what we all hope for in our own lives — days we ourselves can make distinct? There are far worse things we could be than heirs apparent of neighboring idealists.

Stand by This Faith, Rally, March

After Election Day, I continued to wear my ‘Love Trumps Hate’ button and also added a safety pin to my lapel for good measure. Beyond politics and personalities, I believe that certain principles generally hold true. On the eve of Thanksgiving, while I was riding an express train home on NYC transit wearing both button and pin, a man and his male friend got on at Penn Station. This man was well-dressed and a little older; he took the seat right next to mine on the subway, so our wretched encounter would be pointedly personal.